Alexandre was born in 1965 in Atakpamé, Togo. He is the eldest of a family of 11 children. His father was an animist and his mother, to this day, a convinced Catholic. Around the age of 17, Alexandre became very ill. God answered the prayers of friends which led to sudden healing. This event was for Alexandre the start of seeking God. He joined a prayer group and gradually discovered the miracle of a Saviour who died for him on the cross. In the 1990s, together with a group of Christian friends, he decided to start a church where the Word would truly be central. This small congregation has since grown into 'l'Eglise de la Grace en Christ du Togo' where Alexandre was a lay preacher from the very beginning. In addition to his work for the church, Alexandre worked for many years as a librarian in the municipal library. In 2010, he met Wijneke during a conference in Benin.

Wijneke was born in 1973 into an orthodox reformed family in Krimpen aan den IJssel. During a holiday in Israel she attended a Bible study in a youth hostel, which for her was the beginning of a search for the truth. In 1996, at the age of 23, she moved to England to look for a church, longing for assurance of faith. It were the words of Romans 5:8 that finally gave her true peace: "But God demonstrates His own love toward us, in that while we were still sinners, Christ died for us."(NKJV). After a long period of moving around (Bible school in Wales, back in NL, 2 years in Benin) Wijneke thought to settle for good in the Netherlands in 2008. But during one more visit to Benin, in January 2010, she met Alexandre...

After a period of many phone calls and mutual visits, Alexandre and Wijneke married in Lomé in 2011. After that, they lived in Atakpamé for 5 years and had two children: Neline (2013) and Niek (2014). Between 2016 and 2020, Alexandre had the great privilege of studying Theology in Brussels. After his studies, we returned to Togo as a family in December 2020, where we now serve our church in Togo as missionary workers connected to UFM. 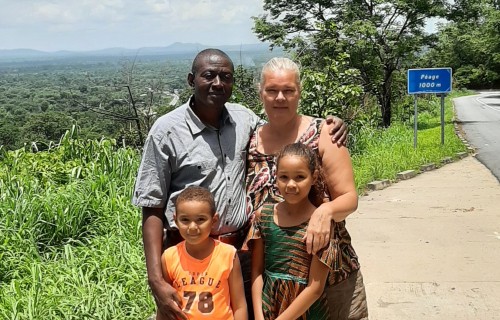