Togo is a narrow country on the West African coast, squeezed in between Ghana and Benin. The capital, Lomé, is especially important to the region as it hosts the only deep-water port of West Africa. An unceasing stream of lorries transport goods to landlocked countries such as Burkina Faso and Niger. Togo has a population of over 8 million, of whom over 70% are under the age of 30. These 8 million Togolese are from 42 different ethnic backgrounds and speak as many languages. French is the official administrative language. It is undeniable that the Togolese are very religious. References to God, his grace and Bible verses are found everywhere and towns are full of churches and mosques. The vast majority of the Togolese are persuaded of the existence of God and/or the reality of an unseen spiritual world. Unlike Europeans, the Togolese are simply aware of the fact that they depend on influences outside of their control to survive from day to day. In general, there is a definite openness and willingness to hear the gospel and learn about what the Bible has to say on topics such as family, morals, and creation. 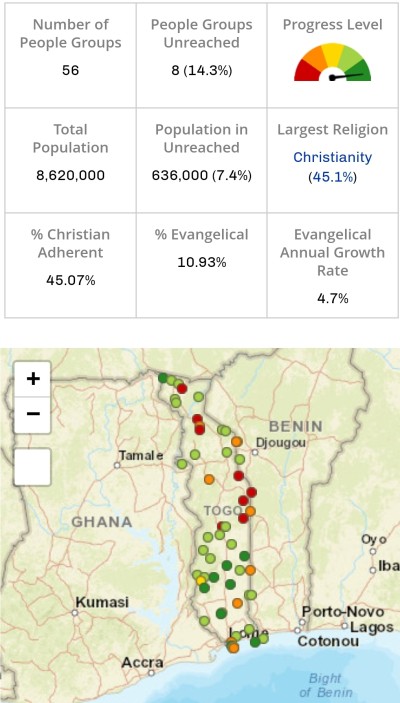 Today, roughly 45% of Togolese call themselves Christian, half of whom belong to the Roman Catholic church. In addition, 16% are Muslim, 38% are animistic and 1% ‘other’. Whilst Christianity in general is undoubtedly gaining influence, the progress of thoroughly biblical Christianity is hindered by some stubborn factors. Often biblical truth gets blended with traditional ancestor and spirit worship, leaving people with a distorted view of God. There is a lack of access to solid biblical theological education and resources for pastors and church leaders, leaving them unequipped to correct the many false views of truth. Added to all of this, many churches are in the grip of ‘prosperity teaching’ and/or have a very unbiblical focus on the ‘gifts’ of the Spirit